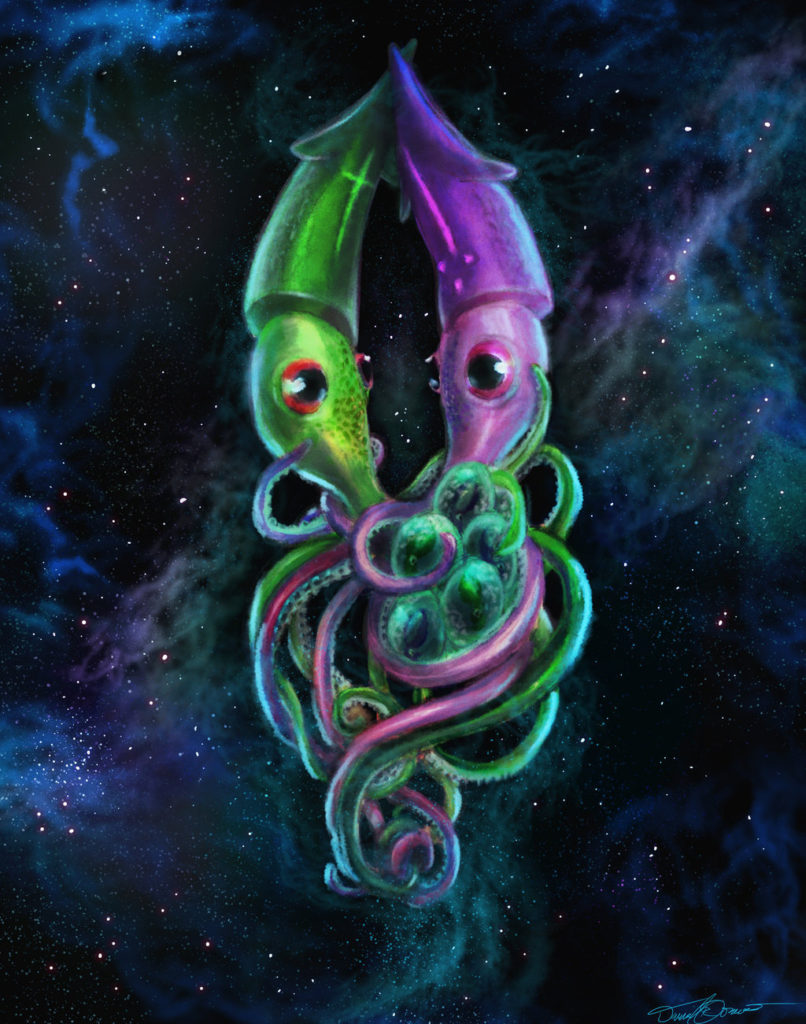 REGISTRATION: If you are interested in playing, fill out our Space Squids Sign-Up Form before 11:59 pm on Monday, June 25th.

Registration will be open after the deadline for stragglers.

If more people sign up than we have room for attendance will be decided by weighted lottery. You should know if you are in or out of the larp by Tuesday, June 26th.

WHERE: A North Minneapolis Nonprofit located near Broadway and Emerson Avenue in Minneapolis. Full address will be released to people who sign up. The space is accessible by bus.
We are requesting a voluntary good will donation $5-10 to support the work of the nonprofit in appreciation for the use of their space. No one will be turned away if they are unable to make a donation.

PLAY STYLE: This is a silly puzzle solving game with the theme of being squids searching for happy romantic or familial relationships. It has a light and engaging ‘mind-meld’ mechanic where you hold hands with the right combination of characters to solve challenges. Suitable for people who haven’t roleplayed before.

ACCESSIBILITY: The play venue is ADA accessible. Plenty of seating. Water available. Climate controlled building. Gender neutral bathroom available. Participants must be able to talk and listen in a cocktail party environment, as well as have two hands that they can hold into different gestures akin to sign language. Being sighted is not required, but it would be very helpful.

COSTUMING: Costuming is not required at all. If you are excited about it, you can dress up as some kind of cephalopod, just make sure your arms and hands will be able to move freely.

WHAT IS A PLAYTEST?: “Space Squids” is the working title for a game that is still being designed, but is fun already! A playtest is a larp session intended to find design flaws in an in-development game. Often, designers will ask players for their thoughts on the experience after a playtest.

SOCIAL: If you would like to hang out after the larp a group will go to the Broadway Pizza at 2025 West River Rd N, Minneapolis. Anyone is welcome to join in on this, including people who didn’t attend the larp!

ART: Last of the Starmakers by David “cinemamind” Romero