In the old, old, half forgotten times, magical beings spin helplessly through realms of music and magic. Tragic are they! These wizards, fae, humans, and magical animals do not see that they already possess the power to change themselves. To take control of their vulnerable situation, each group dominates the minds of the others in turn, each more wickedly than the last. Mind control scars both the leader and the follower, but each has a chance to heal. In the end, only True Love can redeem them and break their bonds. When they have the chance to escape, will they want to?

Glamourous Night is an immersive game about hurting others, and having a chance to redeem yourself for 8 to 30 players. It is an abstract, mostly non-verbal game that is played to music. Players use two movement techniques to resolve their characters’ conflicts, either mutual spell casting or mind control. Players will be on their feet and moving during most of the three hour workshop and the two hour game.

The setting is a fantastical medieval Europe where all the folk tales are true. The characters are powerful magical beings who go on an accidental journey between dimensions. They are tempted to mind control each other before escaping, scarred. Only True Love can break mind control bonds and redeem their actions. Finally, each character decides which of the three dimensions they will make their new home.

Read on for more details!

Details on the game

This game is set in a medieval European world where magic and myth is reality. On the summer solstice a mundane community holds their annual celebration. Players will take on the roles of mysterious wizards seeking knowledge as power, twisted faerie creatures seeking playthings, noble beasts enforcing balance in all things, and reviled sorcerers searching for a place to belong.

Glamourous Night represents magical interactions with two movement techniques, so that magic in this game is a full body experience. Instead of a flick of wand and saying a Latin word, magic in this game involves improvising body movement under specific constraints. The two techniques are simple to learn and the ‘rules’ of how to move make it easy to use and improvise spells. Mind control feels like a seductive domination of will, and focuses on eye contact. Mutual spellcasting is based on contact improv, which feels like playful, connected exploration. The workshop will be about 3 hours.

The play experience has a dreamlike quality, where two people might have an interaction and come away with different ideas about what happened. This game uses music to inspire the story and there will be a soundtrack for each scene of the game. Because movement is the most important way to communicate in this game, play will be largely nonverbal. Play will be about 2 hours.

Free parking lot onsite. A number of attendees will be driving from Minneapolis and St Cloud and you can indicate in your sign up if you need a ride.

No public transit stops nearby.

On the day of the event we request a pay-what-you-want goodwill cash donation ($5-$20 suggested) to support low-cost immersive scenarios in Minnesota. No one will be turned away if they do not make a donation.

Attendees need to be vaccinated and boosted to the extent recommended by the CDC for their demographic group. Bring proof of your vaccination status for inspection during check in, which could be your card, a picture of it, a document on your phone, etc. Our policy means that for most people, you will need the most recent bivalent booster by January 14, 2023 or we will turn you away at the door. Please reach out if you have any questions about this.

We will be playing in a large and well ventilated room. Masks are required, unless ten or fewer people are in attendance. If you have any symptoms of covid, stay home. If you are able to, take a rapid test before arrival. 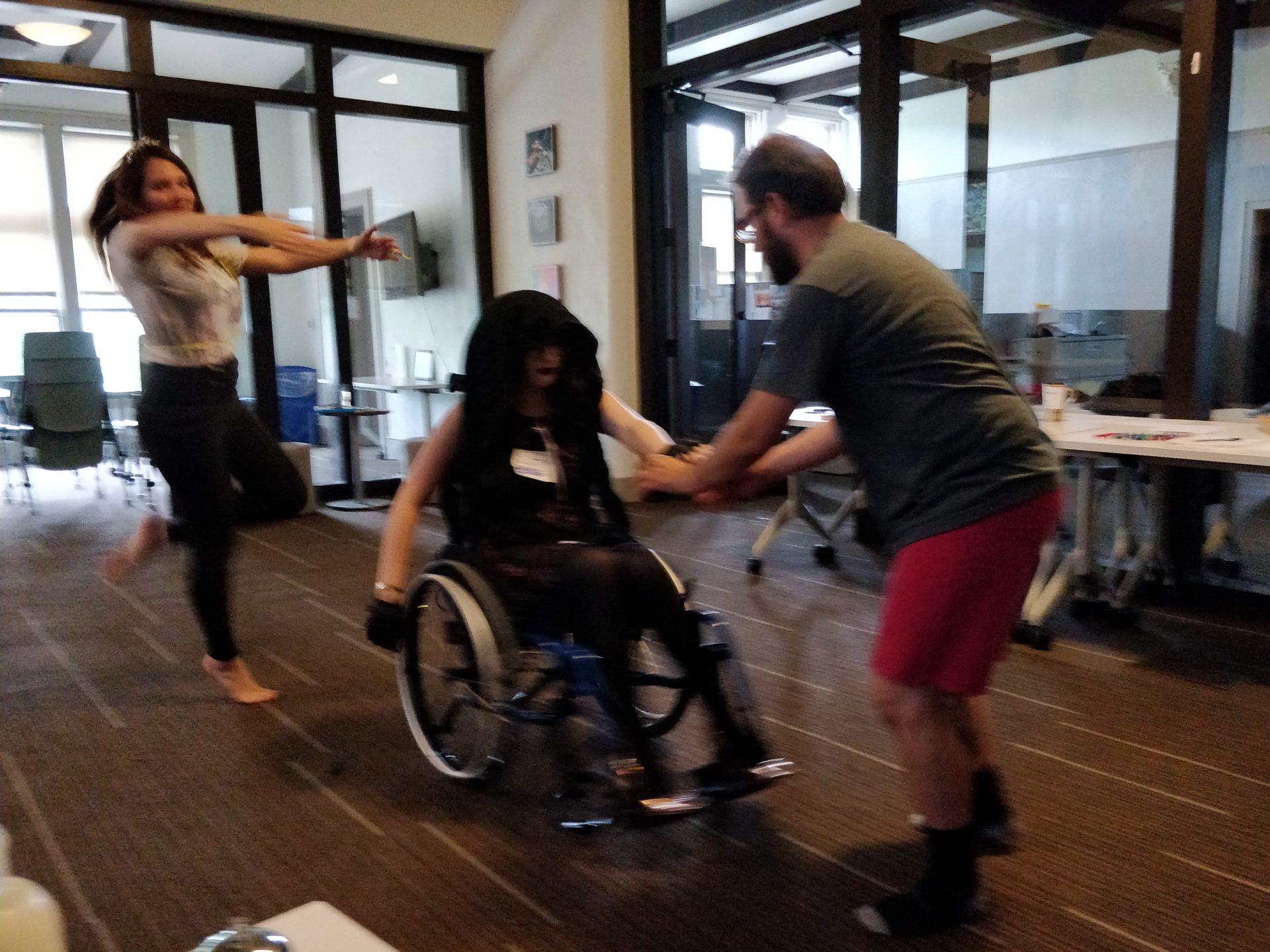 The Art of Leaning In is a counterpart to Ars Rego, purpose built for this larp. It is intended to represent mutual spellcasting, performing arcane experiments with a willing participant, and other egalitarian magical interactions.

Our venue is on the ground floor and climate-controlled. The building is ADA compliant. Our playspace has plenty of seating. Bathrooms are gendered, and shared with the general public.

Water will be available, and we recommend bringing a water bottle for your ease of access. While no food will be provided, food is allowed in the space.

The movement techniques were originally developed for temporarily able people with people who have moderate stamina and flexibility. Do not hesitate to reach out, we are willing to work with you to make accommodations, limited by our available time and financial resources.

We will take several timed breaks during the 3 hour workshop, the 2 hour runtime will be continuous though an individual can take a break at any time. During play we want to dim the lights a bit, but it is not an essential part of the experience and can be skipped. There is a musical soundtrack for play that is intended to fill the room with sound but not overwhelm the ability to speak to someone directly in front of you. During play speaking will be rare, requested by a hand signal, and only done as a duo.

The story of this game guides the characters to explore how feeling overwhelmed, out of control, and alone in their backstory affects them now, and moves them towards healing that hurt. The method for this is a journey between worlds and the confrontational nature of mind control magic.

A key element of play is magical mind control, which is portrayed via a meta-technique that emphasizes player consent. Still, characters will be temporarily controlled by others before the tables are turned. Sexual violence is a banned theme for this game, instead characters use mind control as an unhealthy coping method and attempt to gain control of an out of control situation.

This is a highly physical game where the majority of play is done via non-verbal movement techniques. We recommend you eat before the event. Definitely bring your water bottle because you can expect to sweat! All techniques will be taught in a workshop and no prior skills are needed to play.

The first and most important thing is to wear clothing that is comfortable to move in for long periods of time, and that you don’t mind getting sweaty. Secondarily, wear black if it is easy for you to do so.

After the event some folks will get food together to continue to hang out at an eatery in Saint Cloud. If you are a local, tell us your favorite spots near the library when you register! Hanging out afterwards is totally optional, and we think it’s fun to get to know your fellow players as people, not just as their characters. Folks who didn’t attend the event are welcome to attend this part too.